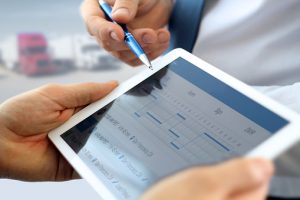 New federal regulations may help reduce the number of truck accidents in the United States by requiring commercial trucks to be installed with electronic logging devices. While it remains to be seen how many Connecticut truck accidents this technology will prevent, the electronic logging devices show early promise for increasing safety on the road.

There are many causes of truck accidents. An experienced Fairfield County truck accident attorney will help you identify which parties are responsible and fight for the compensation to which you are legally entitled.

For years, commercial truck drivers have been required to keep travel logs of the time and distance they drive in a given day. This allows federal inspectors to ensure that drivers and companies are complying with federal laws that restrict the number of hours a trucker can drive in a single day. However: hard copies of these pen-and-paper logs were not always accurate. The system relied on honest self-reporting from truck drivers. Because truck drivers are often paid by the mile - not the hour - truck drivers had a financial incentive to push the federal limits, and squeeze in as many miles as possible.

Electronic logging devices (ELDs) do not change the number of hours a truck driver can drive in a single day. Rather, they provide a more accurate reporting system, to ensure that drivers are complying with the law (which currently limits commercial truck drivers to eleven hours per day of driving). ELDs link to a truck’s engine to monitor its run time, and send alerts when it exceeds the federal limit. Trucks.com reports that all commercial trucks must be equipped with ELDs no later than December 18, 2017.

Resistance to the Electronic Logging Mandate

Of course, not everybody is excited by the prospect of a new safety regulation. Trucks.com also reports that the Owner-Operator Independent Drivers Association has made many unsuccessful legal maneuvers aimed at stalling the ELD mandate. In October 2016, the Seventh Circuit of Appeals rejected the Association’s arguments that the mandate would be intrusive and encourage harassment of carriers over driving hours. The Association has also supported a bill which would delay implementation of the ELD mandate until December 2019. The bill (which has a remarkable 49 co-sponsors) has not moved past the House Committee on Transportation and Infrastructure.

In voicing its opposition, the Independent Drivers Association frequently cites concerns over privacy, and the potential for harassment. Yet these vague concerns seem misplaced when the regulation at issue is projected to prevent almost two thousand truck accidents per year. This amounts to twenty-six lives which are saved annually, and thousands of injuries which are prevented. More important, independent truckers’ concerns that the legislation is designed to run them out of business ignores the primary issue: that regardless of any actual or perceived motivation behind the mandate, it will almost certainly save lives.

If you or a loved one has been injured in a truck accident, be sure to consult with an experienced Fairfield County truck accident attorney as soon as possible. You have legal rights which are subject to a statute of limitations.