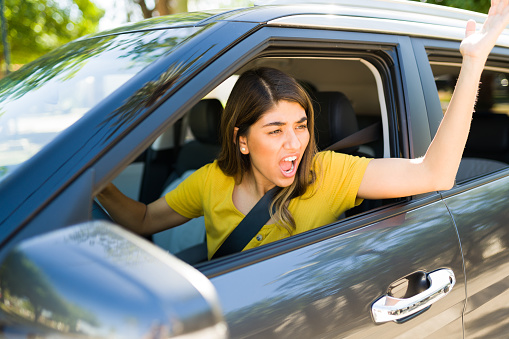 Even though aggressive driving is extremely dangerous, road rage remains one of the most common causes of car accidents. Road rage is a form of aggressive driving, and it can be expressed through verbal abuse, threats, criminal damage, physical violence, and dangerous driving behaviors.

Common examples of road rage include braking suddenly in front of another vehicle (brake checking), tailgating, erratic lane changing, and illegal passing. According to the AAA Foundation for Traffic Safety (AAAFTS), aggressive drivers are a factor in up to 56 percent of fatal car crashes every year in the U.S.

What is the primary cause of road rage?

There are many factors that can cause a driver to have road rage, but it's important to note that there's no good excuse to drive recklessly and put others at risk of getting injured in a crash.

The most common causes of road rage are typically impatience (e.g., getting stuck in heavy traffic), running late to work, and the behaviors of other drivers.

Nearly 80 percent of drivers showed significant aggression while driving at least once in 30 days, according to Motor1.

Yelling and tailgating are two of the most common ways drivers display road rage. In a survey by the AAAFTS, 46.6 percent of drivers said they had yelled at another driver in the past year and 50.8 percent said they had tailgated another vehicle on purpose. Another 25 percent of the drivers who were surveyed said they had blocked other drivers from changing lanes.

Honking is also considered road rage. Horns are meant as a way of communication between drivers and can be used to warn other motorists of potential dangers, but some drivers abuse their horns. About 45 percent of drivers say they honk their car horns to show they are annoyed or angry.

Sometimes road rage can turn physical, and when that happens, it usually doesn't end well for those involved. In the same survey of drivers, it was found that about 3 percent of the respondents had purposely bumped or rammed another vehicle out of frustration.

In Connecticut, State Police recently responded to a shooting on the I-91 northbound Exit 33 ramp in Hartford. According to police, the incident took place on Saturday, Feb. 19, 2022, after the two vehicles had been involved in a road rage incident on I-84 eastbound between Bristol and Hartford.

How to avoid road rage

The Connecticut State Police offers these helpful tips and reminders to avoid conflict on the road with other drivers:

One of the best ways to avoid getting road rage is to give yourself plenty of time for your trip. The more time you give yourself to reach your destination, the less likely it is that you will become irritated or impatient and engage in aggressive driving behaviors. Likewise, if you're already upset and planning to drive, it's best to take time to calm down before you get behind the wheel.

If you or a loved one was injured in an accident caused by an aggressive driver, you deserve justice and financial compensation for your losses.

The problem is insurance companies have a vested interest in minimizing the value of accident claims and may try to pressure you into accepting a lowball settlement offer that falls far short of covering all your damages. That's why you need an experienced car accident attorney who will fight for your best interests.

At Vishno Law Firm, we've been helping individuals and families in Connecticut get the compensation they deserve for over 25 years. Get the law firm that gets results. Contact us today for a free consultation. We have two offices located in Fairfield and New Haven, Connecticut.